Arthur ‘Lynn’ Lockrow was born on November 21, 1945 in Nyskiuna, New York and passed away on January 3, 2021. Lynn lived on Roanoke Island with the love of his life Gigi Grill (who passed away several years ago) and enjoyed visits with her son, Nathan Voodoo. He loved his two wondrous felines, Bogey and Smudge; he also cared for several cats that hung out around his home. 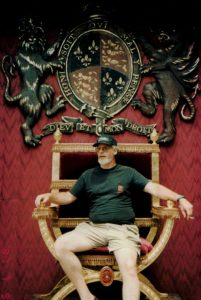 Lynn enjoyed floating the waters around Roanoke Island on his sailboat ‘The Manx’. His friends waited for the call to assist with either putting the mast up or down every year. His other hobbies included working on and flying radio-controlled model airplanes, painting, drawing and aviation history. In his spare time he watched his beloved University of Auburn teams play: ‘Go War Eagles!’

Lynn was a teacher, mentor and friend to many…