In remembrance of Marc Basnight, former President Pro Tempore of the NC Senate and Alumnus of  The Lost Colony and the Roanoke Island Historical Association.

Marc Basnight was proud to be a Roanoke Islander, a Dare Countian and a North Carolinian. He loved people. Like Mark Twain, he had the ability to look beyond a difference of opinion, and find something to like about everyone he met. 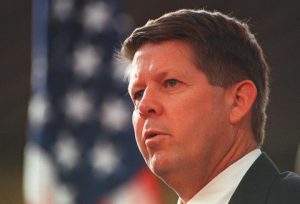 As a young man who possessed a voracious appetite for reading, he entered the world of North Carolina politics. After a short stint serving on the NC Board of Transportation, he served in the state senate for 26 years—18 of which as President Pro Tempore, “making him the longest serving head of a legislative body in North Carolina history.” With his power & influence, he made a positive—and long-lasting impact on transportation, education and the environment in the state.

He loved making North Carolina a better place to live.  He also loved Paul Green’s The Lost Colony, and was committed to its longevity.

In 1957, young Marc auditioned for a role in the play and became the first member of his family to be selected for a ‘speaking role’ in the production. He portrayed George Howe, Jr.—one of the little boys who appear in the Fishnet Scene, carrying fish they have caught & sassafras roots they found. His line: “And see the sassafras roots. They will make good tea for father’s fever.” He held the role from 1957-1959, switching over to colonist child in 1960, and returning in 1961 to play both a colonist child and George Howe Jr. Marc’s mother was also in the show from 1957-1959 & again in 1961 doubling & sometimes tripling up as Agona, Manteo’s wife, and a colonist.His sister Della was there in 1957 & 1959-1961 as a colonist woman.

Years later, Marc served on the Roanoke Island Historical Association’s Board of Directors in 1980-1981; and 1986-1993. During his professional career, Marc fought to strengthen the Arts in the state, and was instrumental in securing funding for arts and arts education non-profits—RIHA & The Lost Colony among them. From state allocations to aid outdoor dramas; to supporting Emma Neal Morrison & Andy Griffith in their formation of an endowment for the organization; to establishing a scholarship in honor of his mother; to launching a golf tournament as a fund-raiser, Marc Basnight helped The Lost Colony, and many other state arts organizations enrich the culture of the areas they serve. In 1994, RIHA voted to make him an Honorary Vice Chairman for life.

Like Paul Green’s John Borden, Marc Basnight “rowed the sounds and tramped the bogs and wilderness of salt-sea grass” of the Outer Banks and saw his destiny. In his heart, he held a tender love of our heritage, and we are all the better for it.