The Roanoke Island Historical Association is proud to announce that Jerad E. Todacheenie
will join their artistic team as the Associate Choreographer for the 84th season of The Lost Colony. 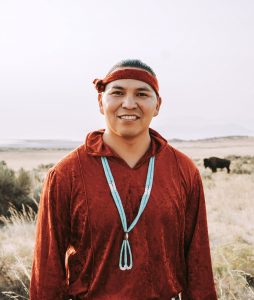 Todacheenie is a Native American (Navajo/Tlingit Alaskan) dancer and choreographer originally from Shiprock, New Mexico on the Navajo Reservation. He has danced traditional and pow wow Native American dances throughout his life but is most proficient with the hoop dance. Jerad graduated from BYU where he joined the performing group, BYU’s Living Legends; A world traveling dance team that features the traditional dances of three cultures, in particular traditional Native American dances. He performed for five years with the Living Legends, three of which he taught and choreographed various numbers. Following graduation, he served as a guest choreographer on numerous local performances in Utah involving Native American culture, including: Luz De Las Naciones, Living Legends Circles, Christmas Around the World, local business events, and recently helped with BYU’s touring performance Spectacular in China.

Jerad shares his enthusiasm in joining The Lost Colony: “I am very excited and honored to be a part of The Lost Colony production. It is rare with historical pieces of any kind that directors seek the voices of those of indigenous descents. I was elated that Jeff and his team not only value but respect the Native American voice, traditions, culture, and beliefs. I am excited to see how the production turns out.”

The Lost Colony staff and RIHA Board of Directors are extremely pleased and enthusiastic to introduce Jerad E. Todacheenie as their new Associate Choreographer.

“We are thrilled to have someone with Jerad’s extensive background and expertise as well as his deep involvement in the Native American culture joining our artistic team.”-John Ancona, General Manager of Roanoke Island Historical Association.