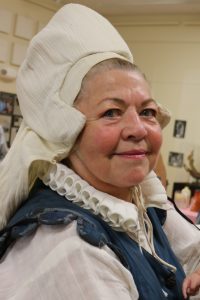 Della Basnight took her Final March on November 5th, 2021. It’s almost impossible to talk about The Lost Colony without bringing up Miss Della. Her laugh still resonates through the Waterside Theatre, and her smile made sunny days in Ft. Raleigh that much brighter. She was involved with The Lost Colony almost since birth. Her mother Cora Mae played Agona for 27 years, her brother Marc was in the show for several years, and most of her family have been involved with the production at certain times throughout the years.

Della was in the show 20 different seasons, and she played a variety of roles, including a Herald, a Colonist Woman, and, of course, Dame Coleman. She left quite an impression as the Dame, and entertained audiences in this role for 9 seasons, in 1971-75 and 2013-2016. Her commanding stage presence made Dame Coleman an icon, and the “Fishnet Scene” was always a highlight when Della slipped into the iconic white coif of Dame Coleman. Her influence on the character is irrefutable, and there’s still a little bit of Della in every Dame Coleman since her tenure. Her artistic achievements didn’t stop once she left the Waterside Theatre; she brought her charm with her to an episode of “Matlock” and “Smokey and the Bandit”.

Apart from her incredible performances on the sand, Miss Della embodied what made The Lost Colony such a special place for the people who walked across it’s stage: the idea that a Lost Colony company is a family. She made Roanoke Island feel like a home for so many. She would often take company members under her wing and would have them over or take them to Great Gut Deli in Wanchese. She organized a Karaoke Night for company members to blow off steam and to take a break from the hot summer heat. She showed company members that the beauty of the Outer Banks isn’t just the beaches and marshes, but the people who live here. She is the reason so many people look back on their summers here with such fondness. Just ask any company member that worked with Della about her, and they’ll tell you nothing but niceties.

Della personified what it means to be a “Keeper of the Dream”. Her dedication to The Lost Colony and community was evident. She will be dearly missed.