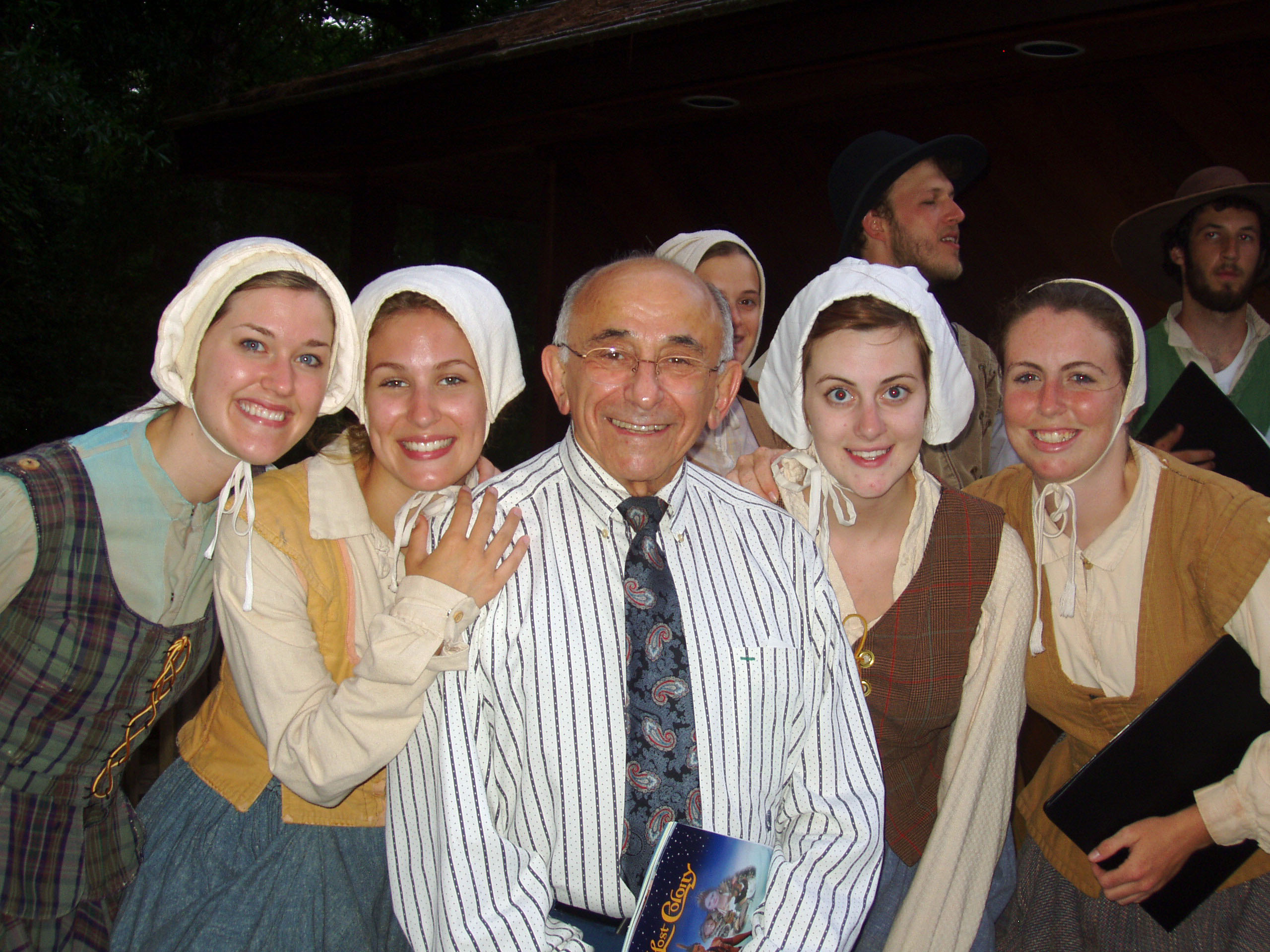 The community of  the Outer Banks lost a great friend, and The Lost Colony lost a legend, when Edward “Eddie” Greene made his Final March on November 29, 2021 at 96.

He exited peacefully and was surrounded by people who loved him, Helen Luciano, Gale Friedel, and Richard Lacerre.

But he was always going to exit surrounded by love.

It was my honor to serve as his video biographer, and now it’s my honor to tell you a little more more about this remarkable man.

Here’s what you know – Edward was in the The Lost Colony in 1953 and 1954.  Colony choreographer John Lehman was in New York working on his own to improve as a choreographer and dancer, and was watching a class given by the great dancer Jose Limon. He spotted Edward and several other dancers he thought would be good for the show.  He invited five dancers to have dinner with him and his wife, Charlotte. He pitched them on coming to Manteo , North Carolina to play in Paul Green’s The Lost Colony.  All five accepted.  Eddie said that “He described it perfectly, he didn’t oversell it, but  he described the people, the show, the area – and I was hooked.”  He stayed hooked. All five of the dancers came down, in Eddie’s car, with luggage and one cat, the first dancers hired from New York City to be in the show.

Think about that – Manhattan to Manteo, driving the two lane roads and taking the ferries, and ending up in Manteo at dawn, at Walker’s Diner, the only restaurant in town, in a converted, not full size school bus.  And it was love at first sight.  His only concern was first seeing the theatre, with seating for about 2,000. “I think we’ve been scammed!  We’ll never see that many people in here!”  But it was full for opening night.

Eddie became good friends with one Andrew Griffith: “Eddie was a dancer, and a good one,” he said in a speech honoring Edward in 2008.  That wasn’t hot air. Andy and Edward shared a serious work ethic.

That strong work ethic caused him to stay in New York City after 1954, where he joined Equity, and began working as a professional dancer for nearly twenty years.  One of the highlights was the National Broadway Tour of  Damn Yankees, where he started as a swing dancer and ended up as a stage Manager and Dance Captain, casting and training replacement dancers during the year and a half tour.  Bob Fosse was impressed enough to write a letter to Edward granting him permission to use his choreography in road shows and summer stock.

And Eddie never danced a lick before he was 21.

Eddie was born in New Rochelle, New York, May 18,1925. His parents, George and Ruth Greene, along with his grandmother, raised him and his brothers, Wick and Teddy, in a home over his parents’ business, The Greene Gallery.   He was surrounded by love from the get-go.

Edward grew up during the Great Depression, and after graduating from New Rochelle High School, entered into the Navy in World War II, training as a medical corpsman on a landing craft for the invasion of Japan.  While he was at sea, the war ended.  He went west, ending up at UC Berkeley, intending to become a doctor.  But then he went to see the San Francisco Ballet.  It was transformative.  “I decided I didn’t want to be a doctor, I wanted to be a dancer.”  He joined the San Francisco School of Ballet within weeks.

And although he ended up as a high caliber dancer, that Outer Banks thing – well, you know. Between gigs, he’d visit as often as possible.

During the hiatuses between shows, he decorated showrooms for Christmas merchandise distributors, where buyers came to see and buy their holiday stock.  He had a vision; he would bring sparkle to Manteo with a Christmas Shop and Art Gallery.

For his first business loan,  he went to Ray White, a newly minted loan officer.  He went without any paperwork.  Ray believed in him, and convinced a sharp-eyed loan committee to believe, too. A half century friendship was born, and Eddie never looked back.

Edward met Richard Lacerre, artist, designer, and antique collector in New Jersey, who came down to Manteo with him; he became his business partner and five decade companion.  Over the years, they made the Christmas Shop itself a work of art, eventually becoming a rambling showplace of fine antiques, enticing displays, entrancing sounds and smells, and – yes – sparkle. (I worked there, as a great many cast and crew did over the years.  Sparkle went home with you and brightened up your shower.)

He never lost his connection with The Lost Colony, often serving on the board, selling tickets at his shops, and buying the color back cover of the Souvenir Program for decades.

Of course, he also had The Showplace Theatre at the Christmas Shop for several years, performing musicals with college students in the back parking lot.  It wasn’t competing with the show – it complimented it and became another reason to visit Roanoke Island.  At one time, The Christmas Shop paid as much in taxes to Manteo as all of the other businesses combined.  So, naturally, when he was on the town board, with John Wilson as mayor and a great group of fellow commissioners, he worked hard for the revitalization of  the downtown, thus increasing his competition.

Manteo needed a bookstore, he started it, along with multiple other businesses, including The Weeping Radish, in the process getting a law passed allowing micro-breweries in North Carolina. (You’re welcome.)

He established the New World Arts Festival, and with his friends David Stick, Andy Griffith, George Crocker and Ray White, he co-founded the Outer Banks Community Foundation, which has helped thousands of people in Dare County.

That is not half of his civic leadership. Governor Jim Hunt awarded him the Order of the Long Leaf Pine, North Carolina’s highest honor.

We were working on the print version of his biography when he made his exit, and I swear he did something interesting every day of his life.  I was still learning more when he went.

Every year, during the first cast and crew meeting of The Lost Colony, Eddie would take time to speak to the company, and tell them that they would remember that summer for the rest of their lives.  He was right.  Eddie had remembered his first summer here, and the love, energy and vision it inspired made Dare County a better place. Manteo and Dare County loved him back, which is why his Final March is anything but final.