The Lost Colony is the first theatre in North Carolina to be presented a Tony Honor For Excellence In Theatre!

Since 1947, the Tony Award has been the highest award presented for excellence in the American Theatre. On Sunday, June 9, 2013 the American Theatre Wing presented the 2013 Tony Awards at Radio City Music Hall in New York City and The Lost Colony was presented the Tony Honor for Excellence In Theatre. The Tony Honors are presented to individuals and organizations that are not eligible for the annual competitive awards. The Lost Colony has the distinction of being one of the last remaining Federal Theatre Projects and enjoys a rich history which includes many luminaries in the theatre. 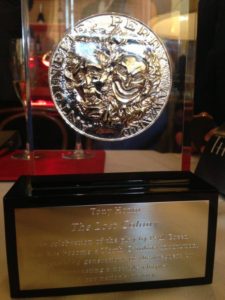 In true theatrical fashion, the Tony arrived to Roanoke Island on the ship that is used in the show as the crowd cheered from the theatre seats. Bill Coleman, CEO, and Steve King, Board Chair, proceeded down the ramp and onto the stage proudly holding the prized award. It was soon placed on a pedestal center stage where everyone could admire it. Following a few speeches, the members of the crowd were invited to come to the stage and hold the Tony for themselves. Pictures were soon posted to locations all over the world. The Lost Colony is the only organization in North Carolina to ever receive such an award. The award belongs to the community of actors, technicians, musicians and dancers who have been a part of the production sine 1937 as well as our loyal supporters and sponsors. It belongs to us all.